Welcome to the Idylease online blog.

Most local residents are aware that Idylease has stood on Union Valley Road for many years. When she opened her doors on New Year’s day in 1903, there were 45 stars on the flag, Teddy Roosevelt was President and Orville Wright took flight at Kitty Hawk.

It is not uncommon for me to run into people of a certain generation that either had their tonsils removed by my father, Dr. Arthur Zampella or learned to swim at the indoor pool at Idylease.

I sometimes wonder if local residents are aware of the rich and varied role of Newfoundland’s most impressive historic structure. I hope that this new online repository of memorabilia will solidify and inform local residents about her rightful place in the annals of West Milford History.

Since April of 2016, when I purchased Idylease I have researched many documents and records in the hope of resurrecting memories, personalities and places that have been lost to history. Considerable time has been spent scanning original glass plates, digitally restoring photographs and repairing tattered documents. Over the coming months I will share the results of those efforts with you all.

I fully encourage you all to ask questions and volunteer information that may pertain to previously unknown facts and family histories that are part to the lineage of the place we call home.

1923 Board of Directors Meeting at Idylease 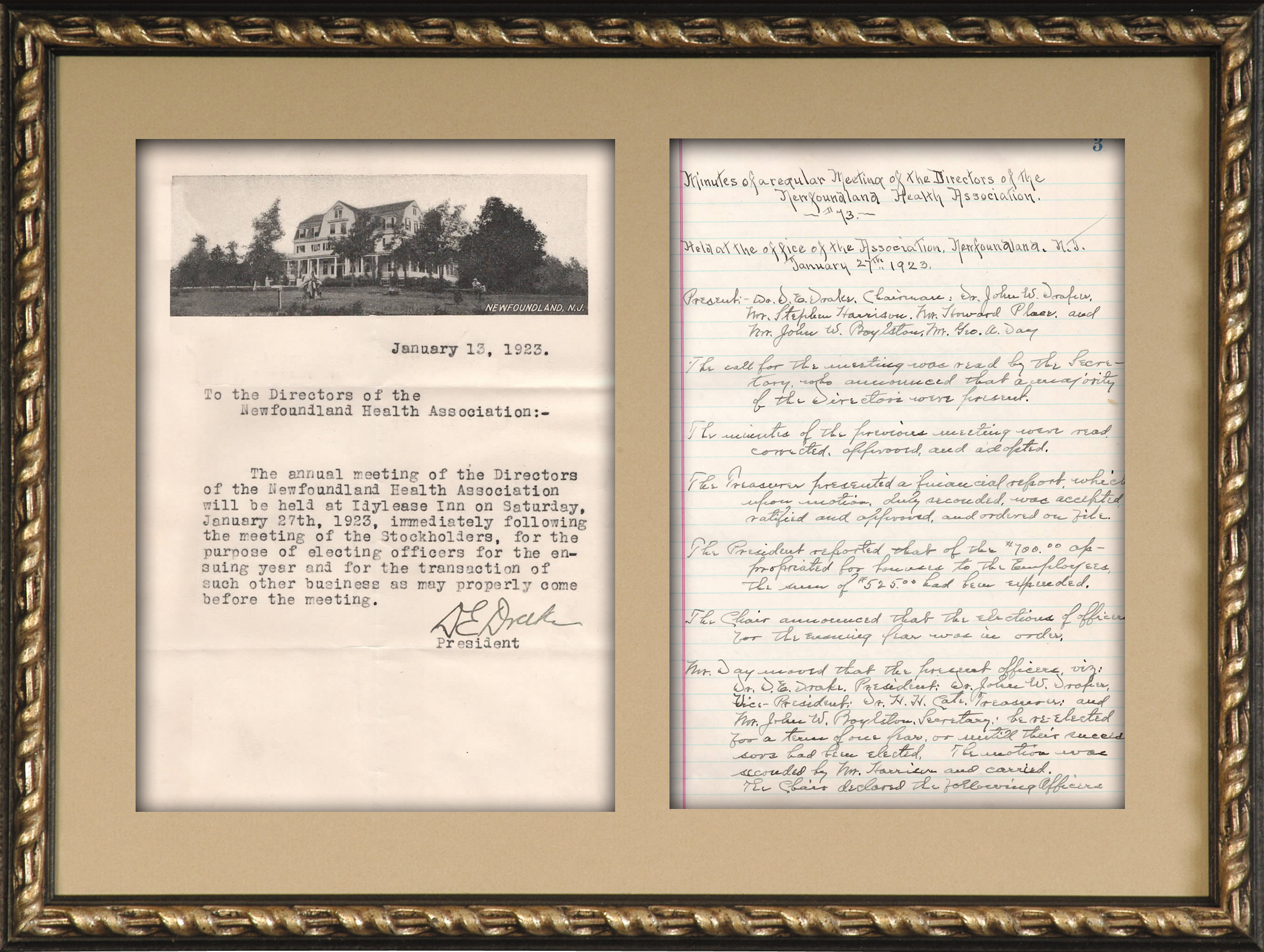 MINUTES OF A REGULAR MEETING OF DIRECTORS OF IDYLEASE
THE NEWFOUNDLAND HEALTH ASSOCIATION
– No. 73 –

Held at the offices of the Association, Newfoundland, NJ
January 27, 1923

The call for the meeting was read by the Secretary who announced that a majority of the Directors were present.

The minutes of the previous meeting were read, corrected, approved and adopted.

The Treasurer presented a financial repair which upon motion, duly recorded, was accepted ratified and approved and ordered on file.

The President reported that the $700.00 appropriated for fare used to the employees, the sum of $525.00 had been expended.

The Chair announced that the elections of officers for the upcoming year was in order.

Mrs. Day moved that the previous officers, Dr. D.E. Drake, President, Dr John W. Draper, Vice President, Dr H.H. Cate, Treasurer and Mr. John W. Boylston, Secretary: be re-elected for a term of one year or until their successors had been elected. The resolution was seconded by Mr. Harrison and carried.

Motion was duly recorded and carried.

Mr. Day moved that rent of that portion of the “Day” Cottage occupied by Mr. Dickinson and the rent of the bungalow occupied by Dr. Cate be the same as in 1922 – $200 – Motion seconded by Mr. Harrison and carried.

Mr. Harrison moved that the allowances made to the Dr. Draper and his wife for board and rooms be fixed at $20 per month. Seconded by Mrs Day and carried.

The Committee on the installation of the electric lighting system reported they had received bids for wiring, switchboard, etc within the building and the lowest estimate received was was $1,500 but they had not yet completed the prices for the lower house, garage and sleeping rooms for the employees or for the generating plant.

After source discussion, Mr Day moved that the President be authorized to execute a contract for the wiring system, switchboard etc. within the building at a price not to exceed $1,500 and that the sum of $1,500 be and is hereby appropriated for that purpose. The motion was duly recorded and carried.

On motion, duly recorded, the Committee consisting of Dr. Drake, Mr. George Day and John W Boylston was instructed to report to the Board no later than March 1, 1923. Estimate the cost for a “power house”, garage and sleeping quarters.

On motion, duly recorded the meeting was adjourned subject to call.

John W Boylston was the architect that designed Idylease for Dr Edgar Day who was the founding member of the Newfoundland Health Association. He was born in 1852 and died at the age of 79 on April 19, 1932 in Ridgewood, New Jersey. He retired in 1927 after long association with the New York firm of J. B. Snook Sons. He was Snooks son-in-law.

Snook was responsible for the design of a number of notable cast-iron buildings, most of which are now in and around the SoHo neighborhood of Manhattan, as well as the original Grand Central Depot for Commodore Vanderbilt, which preceded the current Grand Central Terminal. He also designed several Vanderbilt Mansions that adorned 5th Ave for William Harry Vanderbilt.

Boylstons work was concerned chiefly with the designing of office buildings and hotels. In 1920 he became an associate of the American Institute of Architects and was affiliated with the Brooklyn Chapter.