Horatio Collins King (December 22, 1837 – November 15, 1918) was a Union Army soldier who received the Medal of Honor for his actions during the American Civil War. He also served as a U.S. lawyer, politician and author and was admitted to the bar in New York City in 1861. He served in the armies of the Potomac and Shenandoah during the Civil War from August 1862 until May 1865, when he resigned with the rank of brevet colonel. King earned the Medal of Honor for service near Dinwiddie Courthouse, Virginia, on March 31, 1865. King was the son of the Postmaster General of the United States under President James Buchanan.

During the last quarter of the nineteenth century, West Milford township was a major resort destination in New Jersey. At its height, the area had over forty hotels and boarding houses that catered to the tourists that flocked to the area for its magnificent scenery and healthful climate. Since the turn-of-the-century, West Milford attracted visitors for its rustic beauty and natural resources. It’s approximately eighty square miles of mountains and lakes have delighted visitors for more than a century. In the mid-1800s, renowned Hudson River School painter Jasper F. Cropsey, captured many West Milford landscapes in their autumnal splendor. He married West Milford resident Maria Cooley at the WM Presbyterian Church in 1847.

In the late 1800s and early 1900s, many resorts opened in the township and railroads brought wealthy vacationers from New York City to enjoy the countryside. The transportation revolution of the mid 1920’s, caused tourism to decline in this part of New Jersey, with other, more distant locations rising in popularity.

Around the turn of the century, the City of Newark, NJ systematically acquired large parcels of land until it owned close to a third of West Milford. The City’s Master Plan called for the razing of buildings that were on the watershed preserve, including most of the hotels and resorts. It was their goal to ensure there would be no development or contamination of the many reservoirs in the area that supply the drinking water for resident of the city. Of all the hotels that once graced the region, only one, the resort hotel know as Idylease remains standing as proof of a once thriving tourism industry.

Opened on New Years’s Day in 1903, Idylease thrived during the Ragtime Era. The inn was a short trip from the Newfoundland Train station on the way to tourist-filled Greenwood Lake. Promoted as a health retreat, it sits amid pastoral country in the foot hills of the Kittatinny Mountains in the Highlands Region of NJ.

Idylease, with its prominent central gable, was opened in 1902 by Brooklyn doctor Edgar Arthur Day who billed the Inn as “a modern health resort, delightful in autumn.” Visitors described it as a “haven of rest” whose “masseuses are among the best in the country” and where fine meals were served in the 46 room hotel’s main dining room.

Idylease attracted a variety of prominent guests, including Thomas Edison. Based in West Orange, Edison opened a self-named mine near Sussex County’s Franklin-Ogdensburg mining district in 1889. When making the trip across North Jersey, Idylease marked the half-way point to the mine from his lab in the Oranges. Edison would have his car serviced at a local garage and spend the night at Idylease before continuing onto the mine the following morning. His plan was to harvest a previously overlooked pocket of lower-quality ore on Sparta Mountain, break up the rock on conveyor belts and suck out the iron with electromagnets.

Other noted guests include: Joseph French Johnson, Dean of New York University’s School of Commerce, who hoped to salve his ill health but died there on January 19, 1925. Sports writer William B. Hanna, Civil War correspondent David Banks Sickels, and Grace Abbott, the head of the United States Children’s Bureau from 1921 to 1934. The Inn’s guestbook reveals the names of famous politicians, including New Jersey’s first female congresswoman, Mary T. Norton. 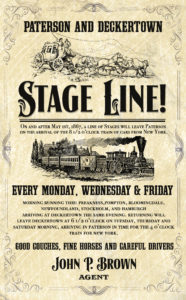 At the peak of the once thriving tourism industry in West Milford, NJ, tourists could board a ferry at Debrosses Street in New York City and catch a train from Hackensack to Newfoundland to escape the confines of the city. As Early as 1857, tourists accessed the area by stagecoach when John P. Brown, proprietor of Browns Hotel in Newfoundland instituted coach service to from Paterson with a stop in Newfoundland. The Paterson and Deckertown stage got off to an auspicious start and operated every Monday, Wednesday and Friday. Agent John P. Brown advertised “Good coaches, fine horses and careful drivers”. The approximately 40-mile trip from Paterson to Deckertown was a bumpy ride along the old Paterson-Hamburg Turnpike. Individuals who wanted to make the trip left Paterson about 10 a.m. Nearly four hours later, they reached Brown’s Hotel in Newfoundland. An untold number of North Jersey residents considered a trip from the Highlands to Paterson something equivalent to a trip across the continent.

A tourists account of his visit to West Milford was recorded by E. Hewitt, an English traveler from London in 1819. It tells of his visit to Brown’s Hotel, two years after its completion:

Bears, deer, and wolves are very numerous in this neighborhood in the fall. A barn not exceeding 60 feet by 30 costs here about $125.00; shingles or wood tiles,15 to 20 dollars per thousand. The whip-poor-will we heard for the first time at this place, repeating its plaintive notes through the whole night.

Although many brave tourists did access the the natural resources of West Milford by coach, by the turn of the century, the railroad became the preferred method to frequent the many resorts that adorned the area. Destinations such as Brown’s Hotel, Idylease, The Hotel Bel Air and the Green Pond Hotel catered to the burgeoning tourists that flocked to the area for its scenic beauty and healthy climate. The 1920’s also marked the height of passenger service provided by the New York, Susquehanna and Western Railway to the Newfoundland Station. Thirteen passenger trains in each direction stopped at Newfoundland Station on a daily basis. The Great depression struck in October 1929 and lasted well into the late 1930’s and the growth of tourism began to decline. In 1937, the NYS&W declared bankruptcy and shortly thereafter was spun off from its parent, the Erie Railroad, which had controlled it since 1898. Also, the mass production of the automobile by Henry Ford in the 1930s rendered the passenger railroad obsolete, making more distant locales such as the Poconos and the Adirondack accessible by car. Passenger service ceased completely by 1966.

The great lawns at the Idylease, once a place where bonneted ladies and jacketed gentlemen relaxed and played croquet, now serves as a landing pad for medivac helicopters under the supervision of the West Milford Office of Emergency Management. Idylease was the first property named on West Milford Township’s list of historic sites, and the last of more than a dozen similar facilities that stood in town during the tourism heyday of the early-20th century.

Idylease was initially advertised in 1908 as a modern health resort, offering “All Forms of Hydro-Therapy and Massage.” Idylease was a “quiet, homelike place for Semi-Invalids, Convalescents, Neurasthenics, and Mild Cases of Cardiac, Nephritic and Stomachic Troubles, and for those desiring change of environment. No Tubercular or Objectionable Cases.” The resident physician and superintendent from 1906 until 1943 was Dr. D.E. Drake. A brochure published in about 1930 stressed the round-the-clock availability of staff physicians, Norwegian-trained massage therapists, and the “most approved scientific apparatus for administering baths, sprays, and douches.” Potential guests, in the accepted social order of the day, were reassured by the policy boldly stated on the first page of the brochure: “Hebrew Patronage Not Solicited.”

By the late 1930s Dr. Drake understood that declining tourism required the facility to adapt to advances in medical science in order to ensure the future of Idylease. Idylease’s initial prohibition of tubercular cases reflected modern understanding of tuberculosis as a transmissible infection caused by bacteria. Robert Koch in Germany first isolated the tubercle bacillus in 1882, although it took some years for the medical community to fully accept the infectious nature of the disease. By 1940, Drake conceded to accept guests suffering from Tuberculosis. With this change, Idylease would established itself as one of the most prominent Tubercular Sanitoriums on the East Coast. With the subsequent development of the TB vaccine around 1927, Dr Drake treated patient that had already been infected prior the vaccine. Throughout the 1940s the number of tubercular patients slowly began to decline and Idylease would face an uncertain future. Dr. Drake would shutter Idylease in 1943 and he would pass away in 1951. Idylease would sit vacant for a period of thirteen years with the windows boarded up and its plumbing shattered.

Dr Arthur Zampella had graduated from the Boston University School of Medicine in 1943. He had always had an interest in geriatric care and the elderly. It was his wish to find a facility where he could practice medicine and serve the needs of an aging population. As a lifelong scholar, Zampella’s interest in this area were reflected in his authorship of many published medical articles, chapters and books on various aspects of aging, care of the elderly, as well as ethical, socio-economic and philosophic discussion in these fields. In an article entitled, “Sampling of the Attitudes of the Aged,” Zampella explored the dilemma of the aging process whereby the elderly are striped of their social identities after being admitted to a nursing home. He felt that a sterile environment, devoid of a homelike atmosphere reduced life expectancy. For many years Zampella had searched for a facility suitable to realize his vision for extended geriatric care and in 1954, he was introduced to Idylease. Dr. Zampella purchased Idylease from the Estate of Dr. Daniel Drake and and converted Idylease into a Nursing Home. The renovated facility maintained a staff of 11 doctors and employed 65 people. Idylease Nursing home closed in 1972. #westmilford #history #tourism #public #library 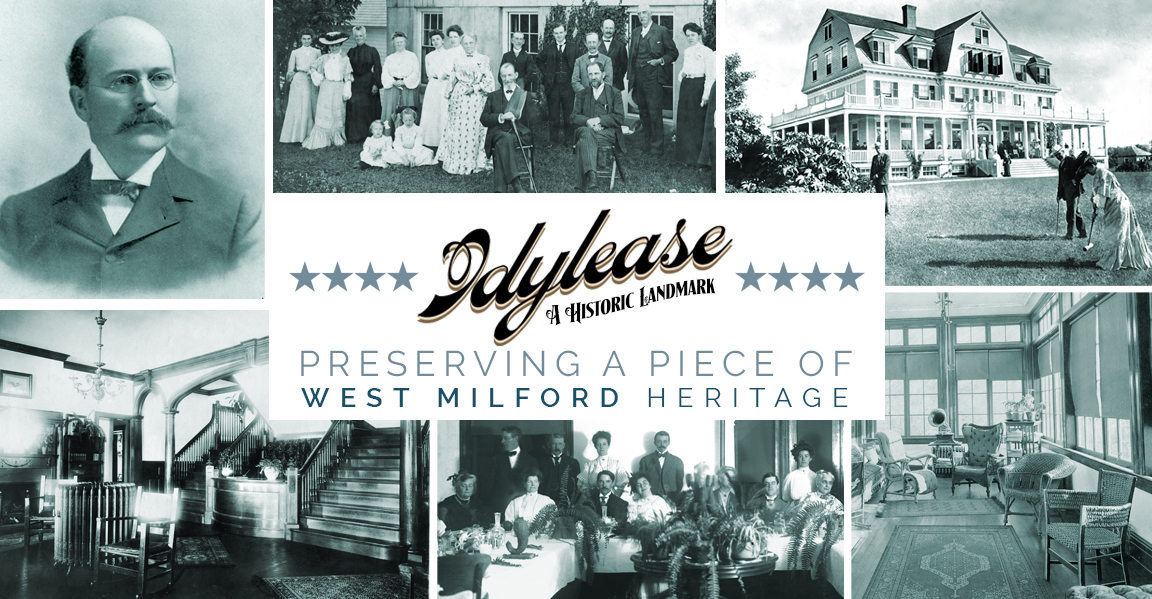 More than 80 million Americans are believed to be actively searching for more information about their ancestry and roots. This explosion of interest in family history is due, in part, to the advent of the Internet. An ever-growing number of institutions, libraries, and individuals are collecting, preserving, and sharing genealogies, personal documents, and memorabilia that detail the life and times of family history. The Idylease History Blog feature blogposts and photographs that chronicle West Milford History. If you are interested in contributing as a guest author or publishing historical images on our blog, contact us at www.idylease.org